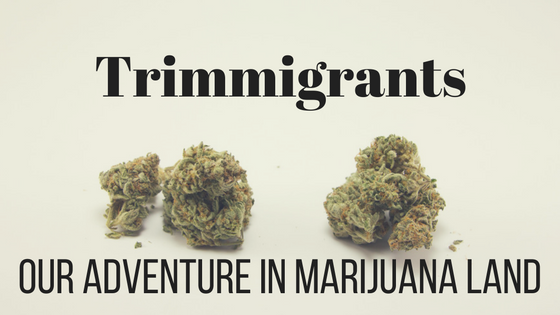 Harvest season in Northern California is a hot destination for travelers looking to find work and make some cash in the ever-growing medical marijuana industry. After a long summer of outdoor growing, cannabis farmers have a large amount of product that needs to be trimmed and manicured before it can be sold. Most farmers hire trim crews to get the job done quickly and efficiently. This is the story of our highly irresponsible adventure in Marijuana land.

After working a summer season in Alaska, Gabby and I wanted to pad our wallets a bit before heading off to expensive Summit County, Colorado for the winter. We’d heard stories of a few friends and numerous friends-of-friends who’d made a quick stack of cash trimming marijuana in northern California at harvest time. So we packed up our car with everything we’d need for a winter in Colorado and headed south to Humboldt with the intention of becoming “trimmigrants”. 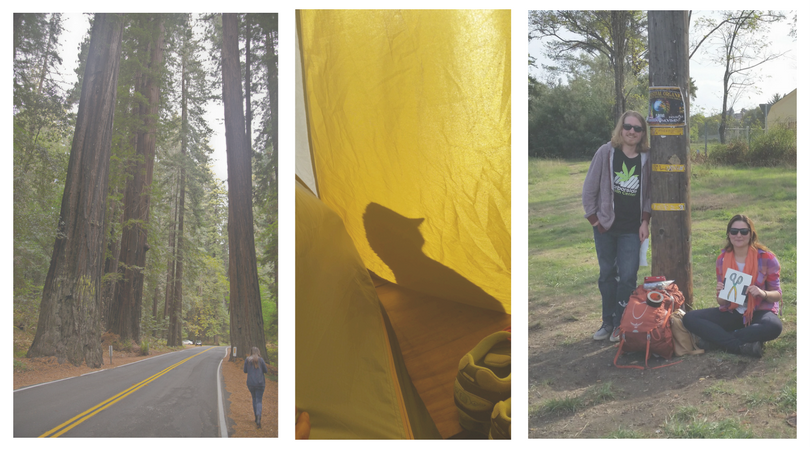 We made cardboard signs with pictures of scissors on them, hung signs with pull-off-tabs including our phone number, and talked to LOTS of other travelers out on the road. We camped our way south through Arcata, Eureka, and Fortuna before finally landing in Garberville on our 3rd day of looking for work. Our first evening in Garberville was a lot like the previous days; we’d hold our signs on the side of the road or on the freeway exit ramp and smile at the cars that drove by, wondering all the while what they were thinking of us as they passed.

That night, our 3rd evening with no work, we talked over our plan for the next day. Should we stay in Garberville for another day? Would we have better chances in the morning? Or should we head northwest out towards Grass Valley where we’d heard there was more work? We decided to stay in Garberville, at least for the first part of the day, and then regroup again around lunchtime.

The next morning we got up early and found a great spot. We held out our signs and smiled optimistically as the big trucks rolled by, hoping someone would stop and pick us up for work. After a few hours we decided to move to the center of town, across from the grocery store. Within a half hour, a big black truck pulled up and the driver flagged me over to the grocery store parking lot. He asked if we had supplies, previous experience, and if we were police officers “you have to tell me if you are,” he joked. I explained that we’d never trimmed before, but that we were eager to learn and had brand new scissors. I told him we had our own car and food and that we were willing to work for a couple of days or a couple of weeks depending on how things went. He said he’d bring us up to the farm for a few days and we could figure out how long we wanted to stay. We were thrilled. 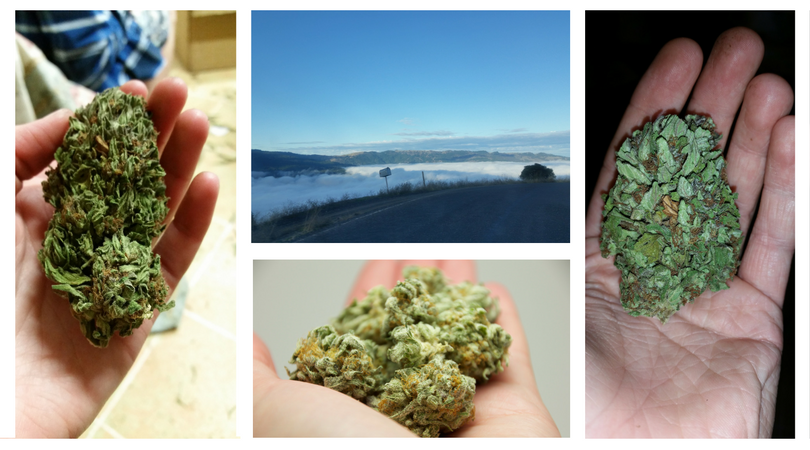 He warned us that it was a bit of a drive to the farm, and told us to fill our gas tank. Soon we were following him out of town and up the mountain. As we tried to keep up with the big black truck, we talked about everything, including the possibility that we could be driving into a very dangerous situation. After 40 miles of carefully guiding our extremely full car up the narrow winding mountain road in the dark, we finally reached the farm.

The boss showed us where to set up our tent, introduced us to the trim crew manager, and brought us into the trim house for a quick tutorial on how to manicure buds. We were introduced to the crew, a friendly group of varied age and nationality. There were a few Europeans, two French Canadian boys from Quebec, a couple of punk rockers and their 2 dogs from Oakland, and two eighteen year old California flower children.

For the next 9 days, we spent 10 to 15 hours a day trimming a variety of strains from Blue Dream, to Sour Diesel to Green Crack. Each strain had its own characteristics; some batches were easier and faster to trim while others would require more precise, delicate, slow trimming. The trim house was a large four-stall garage, but during the daytime we’d sit outside in our chairs and trim in the sun. We would get started shortly after getting up and smoking breakfast, then trim until after midnight; taking breaks to eat, go to the bathroom, or smoke a doobie as needed. I even learned to juggle in the breaks I took from trimming.

We’d all hang out and listen to music together, we’d chat, or play games to pass the time while we trimmed in a circle. Someone would roll a joint and pass it around to anyone who felt like stopping for long enough to take a hit; others would just let it pass. By the fourth day on the farm we ran out of music; we found ourselves dusting off the files we could barely even remember syncing to our iPods. 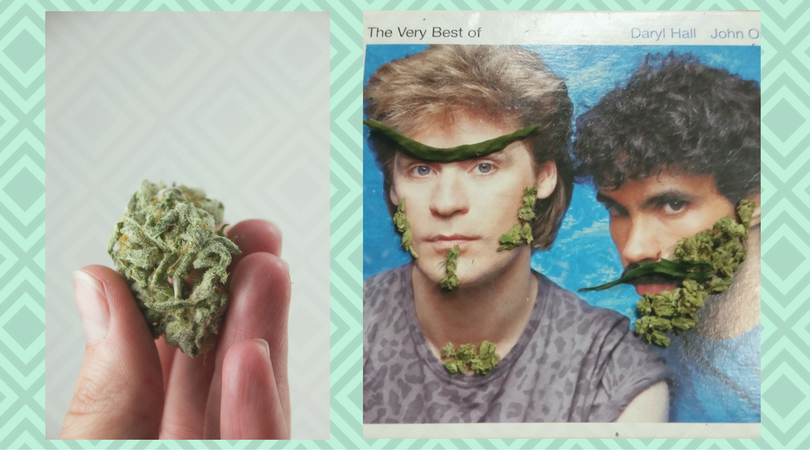 Living on a pot farm was a totally new experience for both of us. We both have plenty of experience with marijuana, but never before on the scale we saw in Humboldt. We had no idea what to expect going into it, but we were surprised to find how normal the family who owned the farm was. Despite living 40 miles from the nearest one-stoplight-town, they were a regular family with kids and pets. Stephanie, the wife, was busy collecting eggs from the henhouse, baking (non-medicated) brownies for her son’s school bake sale, and managing a trim crew while her husband worked out in the fields all day managing the grow team. They would bring us a bowl of fresh eggs every morning, and, one night, even made us a family meal of chicken soup with “home grown” chicken.

We had to leave the farm a couple of times to go back into town to do laundry, get more food/supplies, and use the internet/cell phone reception. Our laundry was covered in tiny pieces of trimmed weed and hash and stunk up the whole laundromat. There was nothing we could do about it. The good news is that the smell eventually did fade. It was a great feeling to call our parents and let them know that we were doing well and vaguely explain our work. They were always happy to hear from us and were careful not to ask any questions they didn’t want the answers to. 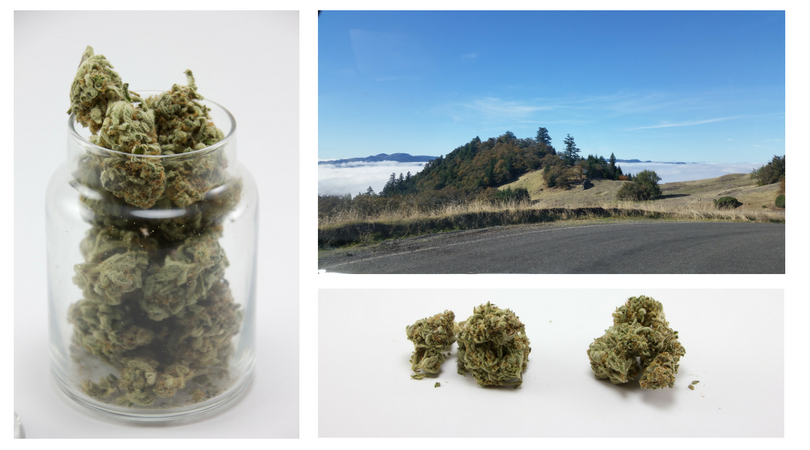 The real problem we were beginning to face was our lack of living situation in Colorado. We’d been having a hard time finding a place that would offer us a six-month lease in the area we needed to live in. Being on the farm without internet or cell phone reception also made it extremely difficult to communicate with the potential landlords we were finding on craigslist. We actually missed out on two possible apartments because we were out of service. Eventually, we had to leave the farm in order to head out to Colorado and find an apartment.

On the last morning we packed up our things, said goodbye to our newly found friends, settled up and got paid, then headed down the mountain for the last time with huge smiles on our faces. We’d fulfilled our dream of heading out to Humboldt and becoming trimmigrants. The money we’d made was a huge help in financing the rest of our trip. When we got out to Colorado, we found a house within two days and started our jobs a few days later.

Although trimming marijuana isn’t a job for everyone, we had an amazing experience. If you’re not comfortable going without a shower or a proper toilet for a few days you might want to just stay home. What we did had the potential to be very dangerous; we paid close attention to the situations we were in, evaluated risks, and watched out for each other all the time. We learned a lot about the process of growing marijuana, about the life of a trimmigrant on the road, and about how much we could live without for a few weeks. 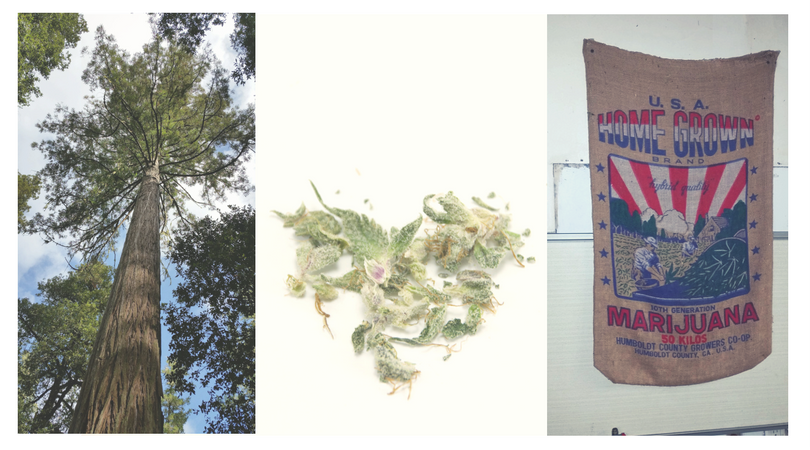 I know you have questions about this; I’ll do my best to answer them all in the comments. When I was looking into trimming, I read every blog I could find and each one only led me to more questions. Ask away. 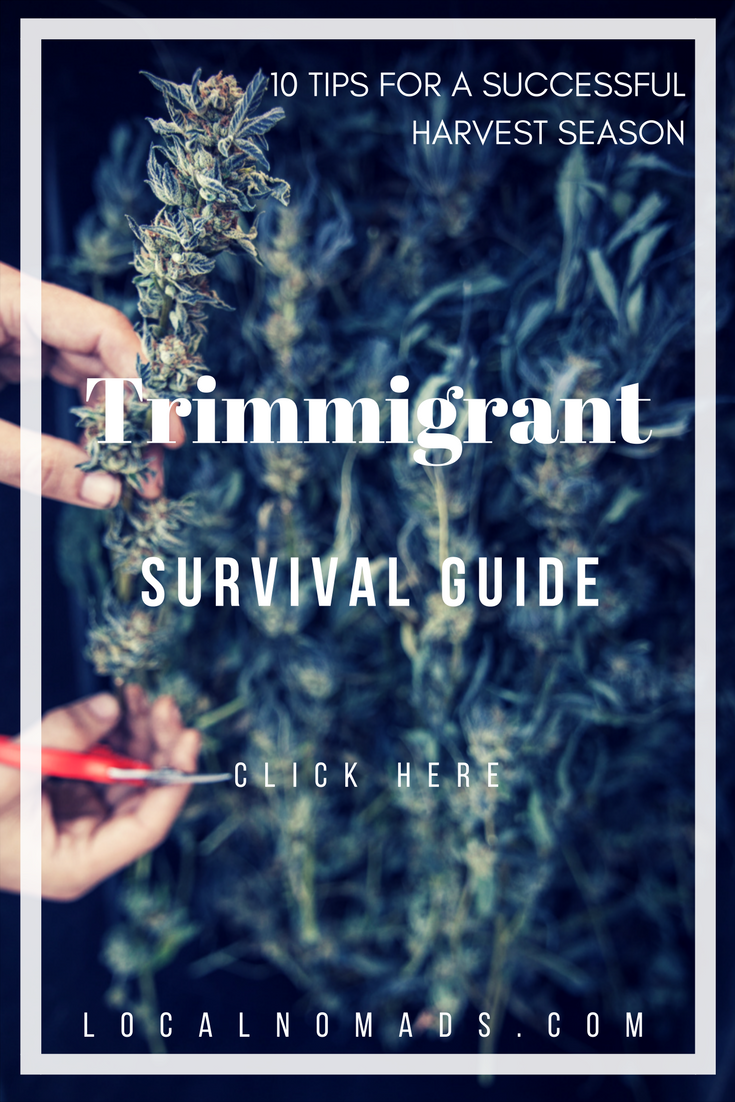