Tucked back in the corner of a church parking lot on Lark St. stands The Machine, a creative co-op, art gallery, and studio space for some of Albany, New York’s most ambitious young artists. The Machine was founded in the summer of 2013 by graduates of the art program at SUNY Albany, including current members Dana and Mic. The name refers to the way each member operates as a different part of a whole, working in different styles, bringing his or her own unique function to the creative machine in an effort to bring art and culture to New York’s capital region. Since opening, they’ve hosted “exhibitions and live art shows, including glass blowing, live music, comedy shows, and live art, all free to the public!” Gabby and I had the chance to visit The Machine recently and catch up with an old friend, current member of The Machine, Kat Brockschmidt. 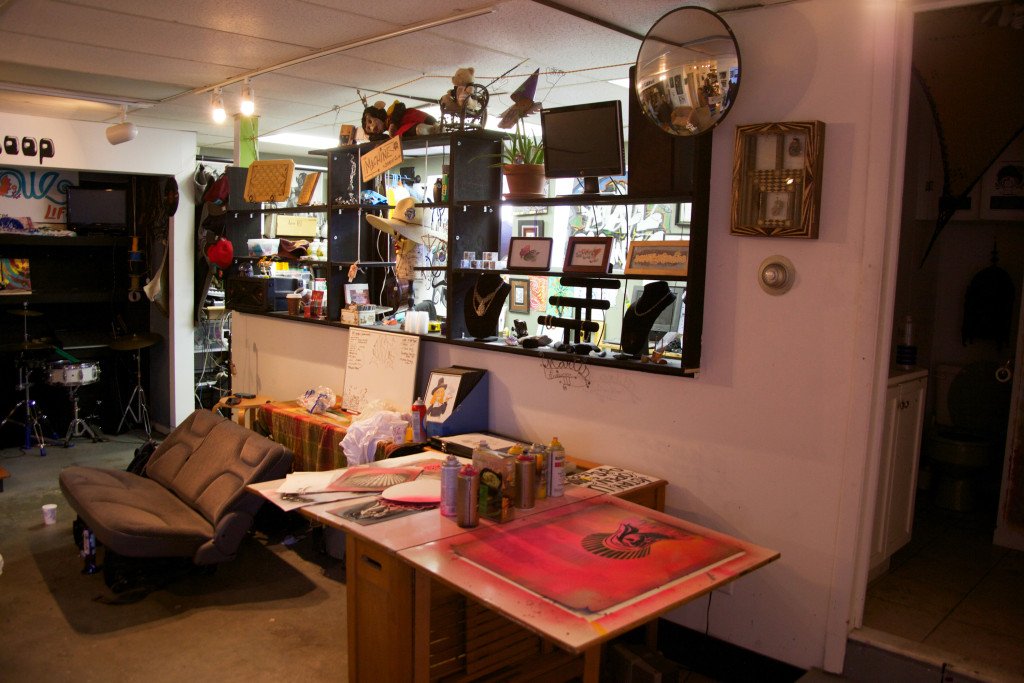 At first we didn’t even see the place, as our GPS directed us around the corner to our destination on the left. “Is this it?” I asked Gabby as I pulled into the church parking lot and headed toward the back corner where the small structure stood. As we walked through the door we were greeted with the aromas of spray paint, oil, burnt wood, and incense. The small, 800 square foot structure, is packed tight with beautiful and eccentric works of imagination and creativity. The Machine is both a gallery and a working studio; art projects in various states of completion mingle with finished work on display and cover nearly every inch of surface in the small space. “You have to see the bathroom” Kat said, “I just redid it for First Friday. It’s called The Funk Gallery”

First Friday is a monthly event on the first Friday night of every month, celebrating art and culture across the city of Albany. Galleries, like The Machine, as well as other local businesses such as coffee shops or breweries, open their doors to the public for an evening of fun and creativity. For this month’s event, The Machine turned their space into a carnival midway, with games of skill and artwork for prizes. Visitors popped balloons with darts, tossed rings over the necks of bottles, and tried their hand at some skee-ball, there was even a kissing booth.

Our close friend, Kat Brockschmidt, has been living in Albany for more than 3 years now. As long as we’ve known her, Kat has rarely gone anywhere without her camera. She’s always working on a craft of some kind, or crocheting a hat or mittens for someone she loves. Kat has an Associate’s in Photography and a Bachelor’s of Fine Arts from SUNY Albany. She’s been working out of the machine since January of 2014.

“I am a photographer, sculptor, screen printer, graphic designer, textile artist, and metal fabricator. Currently my work consists of a lot of bones and female shapes. There are shapes that echo across organic structures, lines and curves that are Earthly, and my work explores them. There is softness in steel, and an organic femininity in bronze.
.

I shoot with fire performers in local abandoned places of industry; factories and steel mills, old train cars rotting away. These guerilla burns exist for the short time we’re there, the audience is the space itself. These places were once a daily part of people’s lives, now they lay rotting and forgotten. For brief moments we light up the spaces, performing for the ghosts hanging around. To me, fire and city scapes go hand in hand. I am lucky enough to live in a part of America where fire breathing/spinning is legal, and you don’t need a permit. The police who inevitably come to investigate are always more interested in learning about the art, than giving tickets”

Recently Kat combined the style of 1950’s cigarette ads with local pin up models and high res (no pun intended) photos of marijuana. Each girl is depicted posing with her clothing replaced by weed. The best part is each girl is named after the bud she wears, like the delicious “Sour D,” or the playful “Blue Dreamer.” You can check out more of Kat’s work here.

While visiting the Machine we also had the opportunity to meet artists Martin, Sauce, and Vincent. Gabby liked Martin’s jewelry so much she decided to buy a piece for herself! We also got to watch as Vincent created a spray paint masterpiece featuring the Virgin Mary with the slogan “Pray before you spray” in a design reminiscent of Shepard Fairey. We had an excellent time visiting The Machine, we were really impressed by the work on display there, it’s just the kind of eccentric work Gabby and I are into. Next time you’re in the Capital Region of Upstate New York, make sure to check out The Machine. 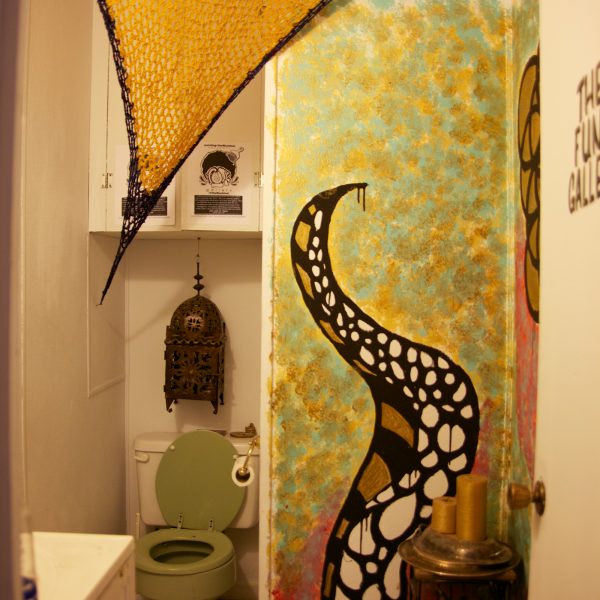 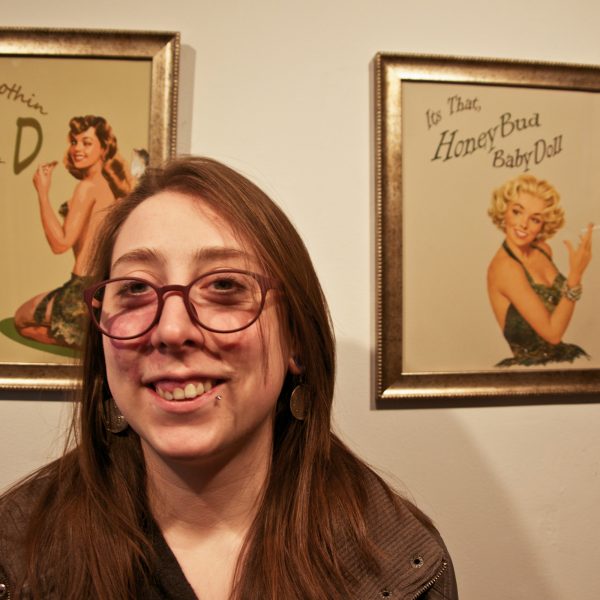 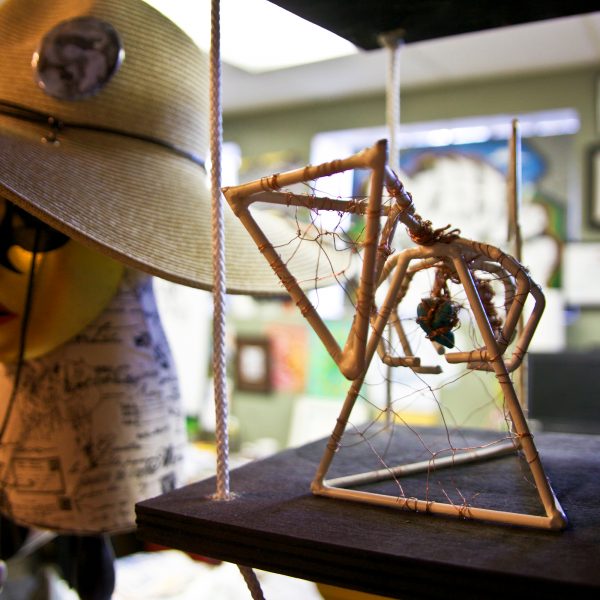 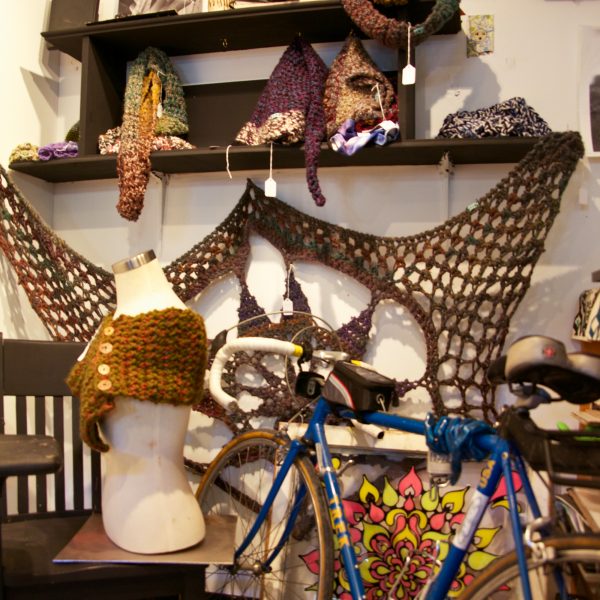 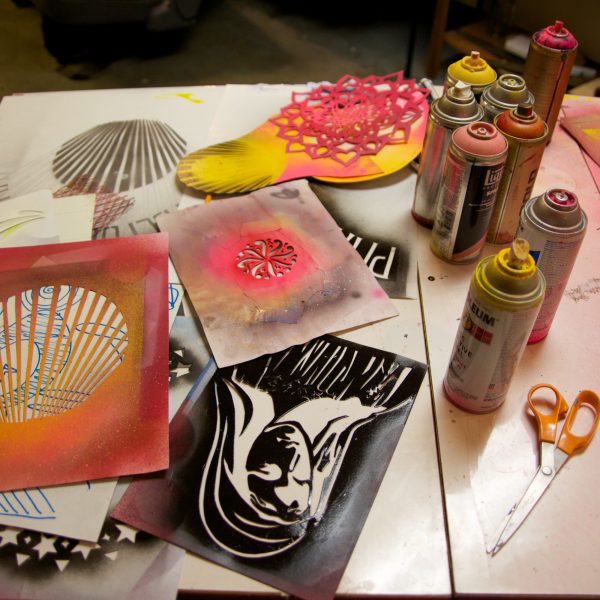 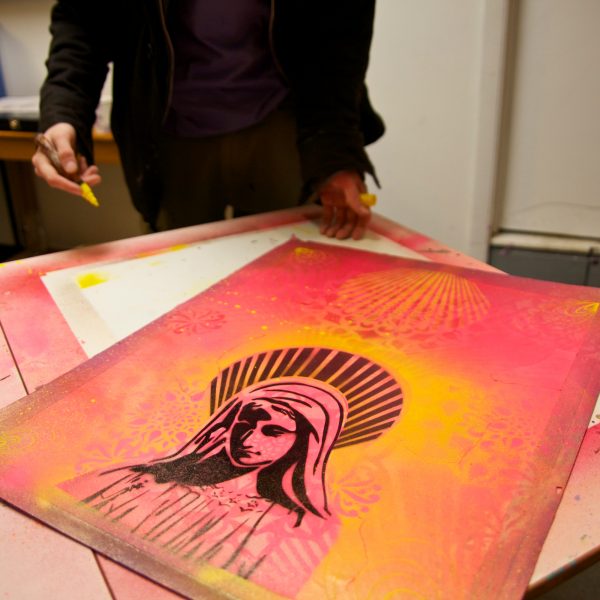 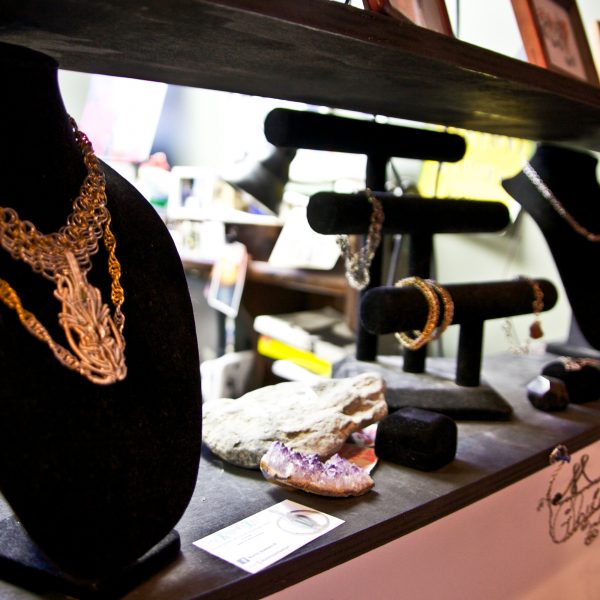 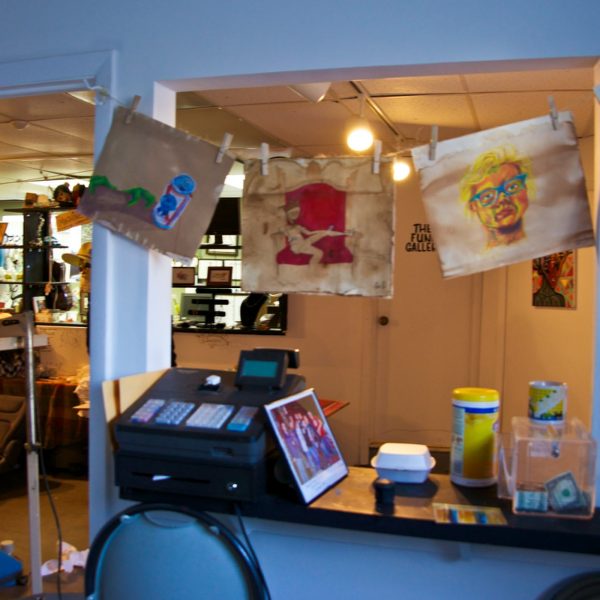