Warning: Creating default object from empty value in /home/customer/www/localnomads.com/public_html/wp-content/themes/pinnacle/themeoptions/redux/inc/class.redux_filesystem.php on line 29
 Staring Into The Face of North Korea: We'll Never Be The Same – Local Nomads

40 minutes after boarding the bus from Seoul we started seeing the guard towers.

As we approached the North Korean border they became increasingly frequent. The spirals of razor wire only added to the tension we felt growing in our stomachs with every mile. Today, we would be directly defying the orders of our concerned parents. “You know, they’ve been known to grab American tourists from the south side and take them hostage!” Sorry mom, but that’s just not true. 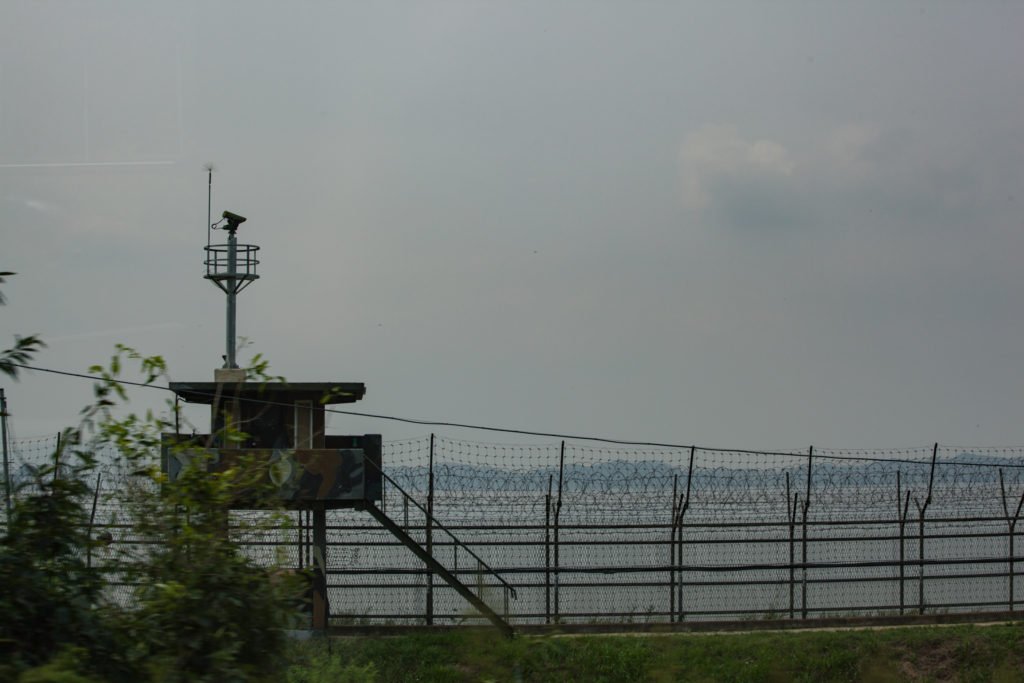 We’ve had a fascination with North Korea ever since we spent an entire year living within range of Kim Jong Un’s missiles.

What was REALLY going on up there?! We’d heard great stories from friends about staring across the border at the lines of North Korean soldiers ominously staring back at you from the other side, and the eerie silence broken only by the footsteps of the South Korean soldiers around you. Not visiting the DMZ turned out to be our biggest regret from a year spent teaching in Korea. There was no way we weren’t going there this time around…

WELL…as it turned out our “make no plans” travel style ended up biting us in the ass on this one…sort of. The classic DMZ tour was entirely booked up for the month we were spending in Korea, not to mention it was a bit cost prohibitive for our minimalist budget. With our hopes slightly dashed we began to search for alternatives. After a bit of further googling, we realized that there’s a lesser known way to catch a glimpse of North Korea, some might even say a better way.

With an admission fee of only 1,500won it was a no brainer! At it’s widest point, the water border is 2km across, with it’s narrowest point being less than 500 meters. As the river is tidal, you could actually walk across in waist deep water at low tide…and it would only take you 10 minutes, that is if you actually made it across without being shot. 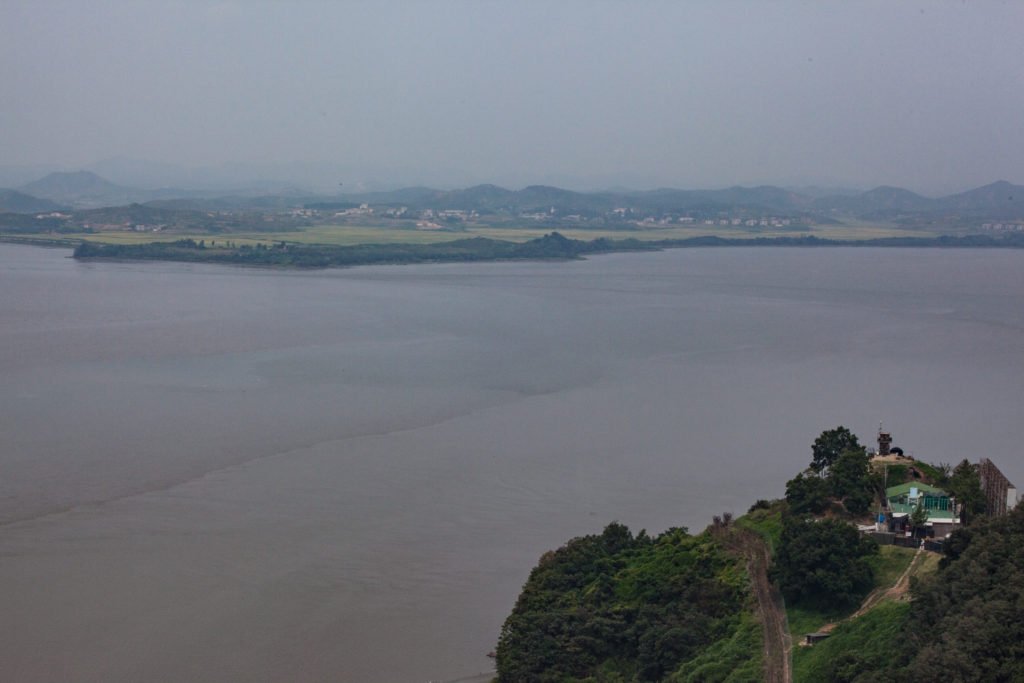 The observatory has 4 floors above ground and offers a decent amount of information on the conflict inside.

They also have a brief, yet interesting, film that explains the structures you can see. Tip: Head to the 4th floor for the english version, unless you happen to understand Chinese! Outside, you can use any of the numerous FREE telescopes available to get an up-close look at the North Korean “village” on the opposite side of the river. Even though it was a hazy day, we were still able to see so much. What we didn’t see were any North Korean soldiers staring us down from the other side, and luckily no one was grabbed and taken hostage either! 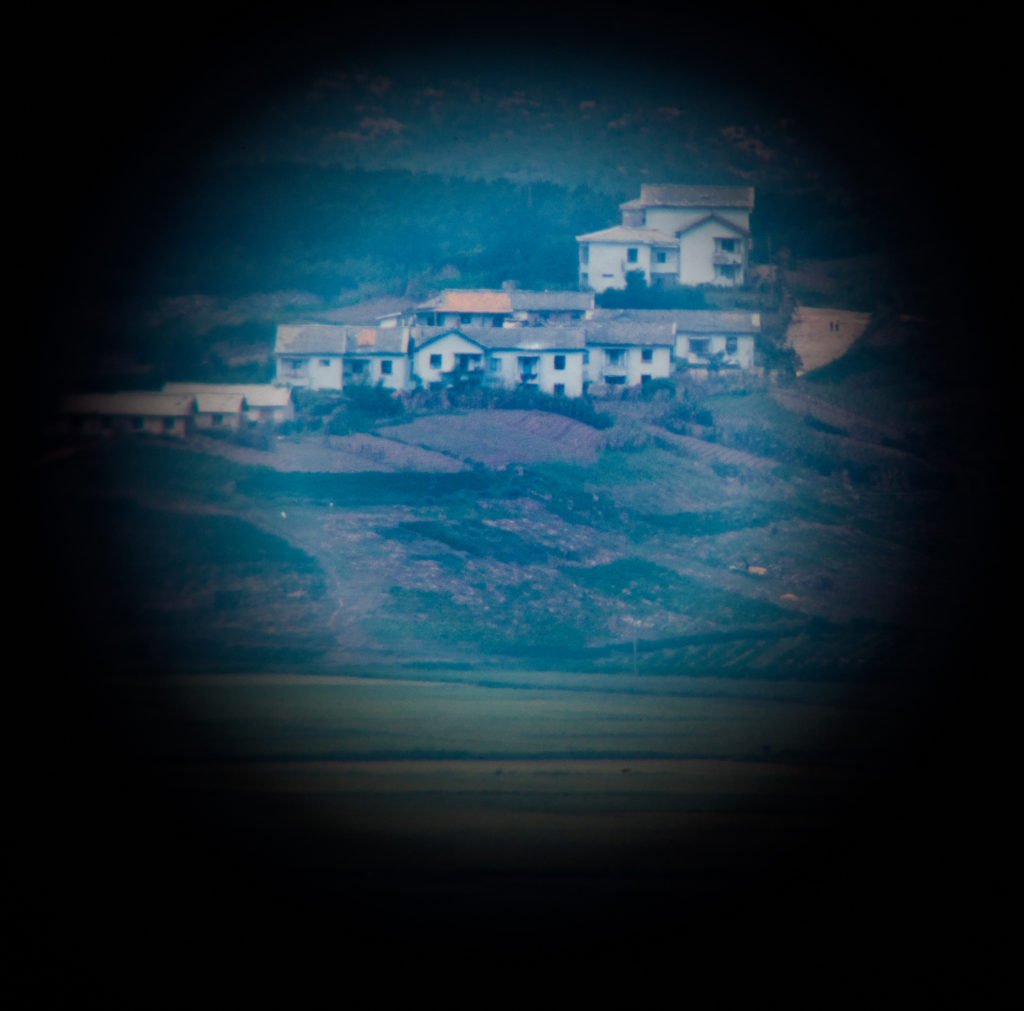 Staring into North Korea was easily one of the most surreal experiences we’ve ever had.

We could easily see the “propaganda village,” a set of empty 5 story apartment buildings that were haphazardly built when the North Korean government realized they were being watched. The apartments were never finished, and some don’t even have roofs. You can also see the clay brick homes the people actually live in. You can see the fields where they grow their crops. Sometimes you can even see people, real life North Koreans walking around, going about their daily lives.

We couldn’t help but wonder what their lives were like.

As weird as it was for us to look across at this kind of poverty, it was even weirder for us to imagine their feelings. What would it be like to spend your days working on a farm with no fertilizer and no gasoline powered equipment, all the while staring across a river at high-rise apartments and a highway packed with cars?

Time seemed to slip away from us as we glued our eyes to the binoculars, placing ourselves in the shoes of the people walking around over there.

Waves of gratitude for our privileged lives washed over us. How different we would be after seeing this place. Once the sun began to set we headed back to the bus. It was a quiet ride back to Seoul, each of us lost in the whirlwind of emotions that followed such an incredible experience. 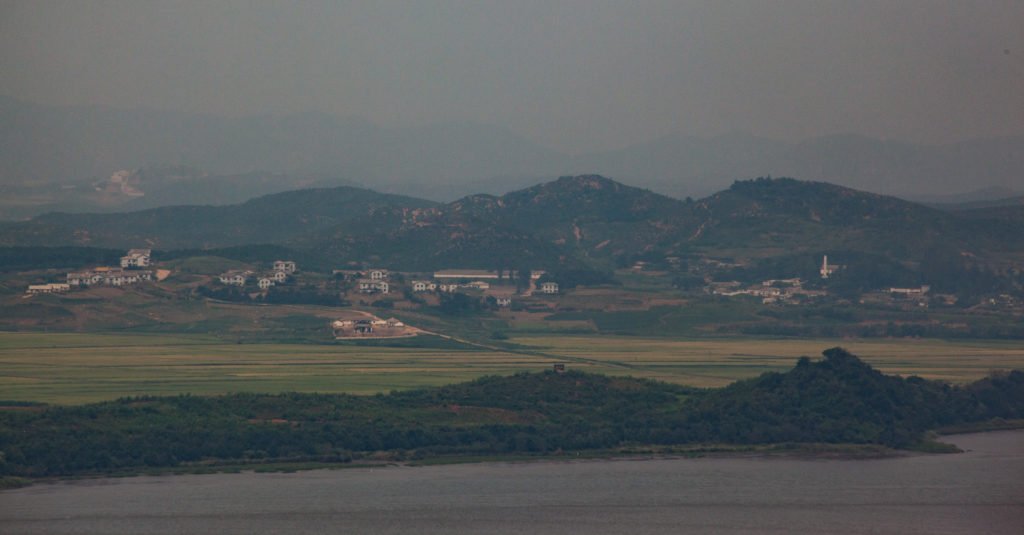 For more information on getting there, check out this great blog post by What-a-waygook 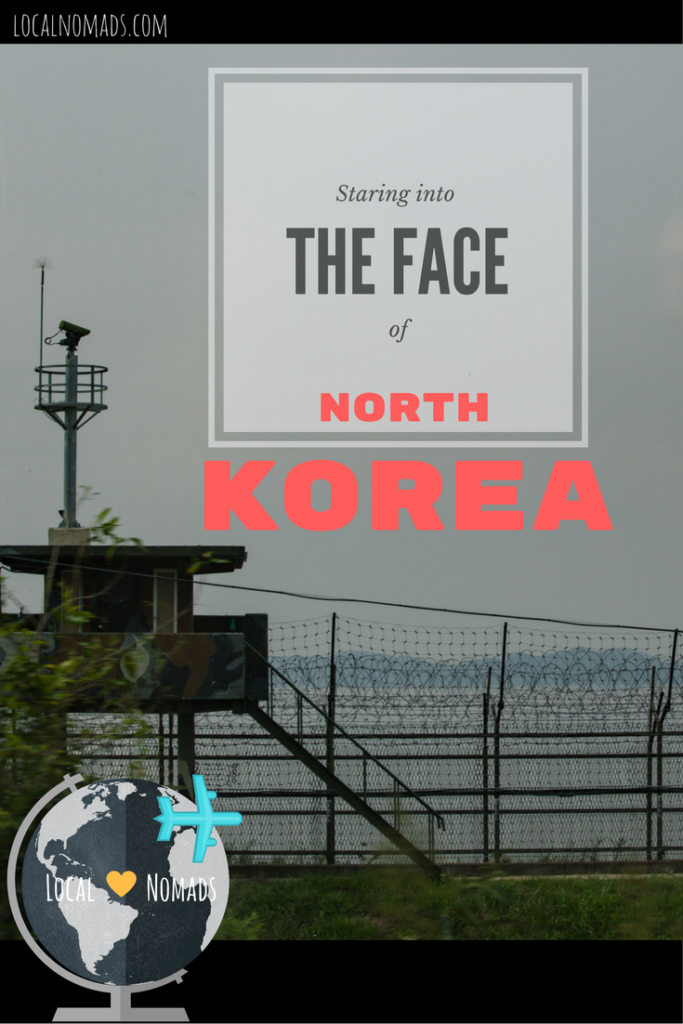