Nyack, NY is an artsy small town in Rockland County with lots of great local shops and amazing views of the Hudson River and Tappan Zee Bridge. Of all the great shops in town, the donut bar, Gypsy Donut, is easily one of our favorites. 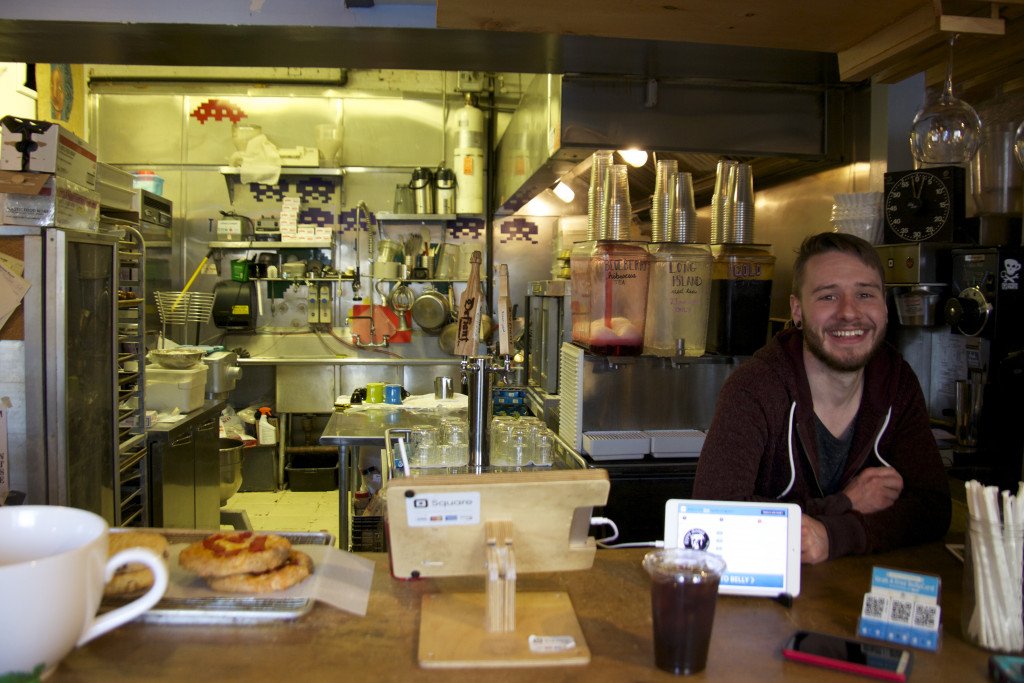 Gypsy Donut sits unsuspectingly a half block off Main Street on Franklin. Past the bike rack and dog bowl and through the front door you’ll enter a tiny hipsterific coffee shop heaven. Gypsy has everything today’s on the go, Prius driving, socially conscious, Internet savvy coffee buff or donut fiend could ask for. The walls are covered with polaroids of happy customers sipping lattes, there’s a small seating area with a coffee table and enough seating for 3 or 4, and a bar area with a few stools. The vibe is perfect combined with the smells of coffee, donuts, and bacon. 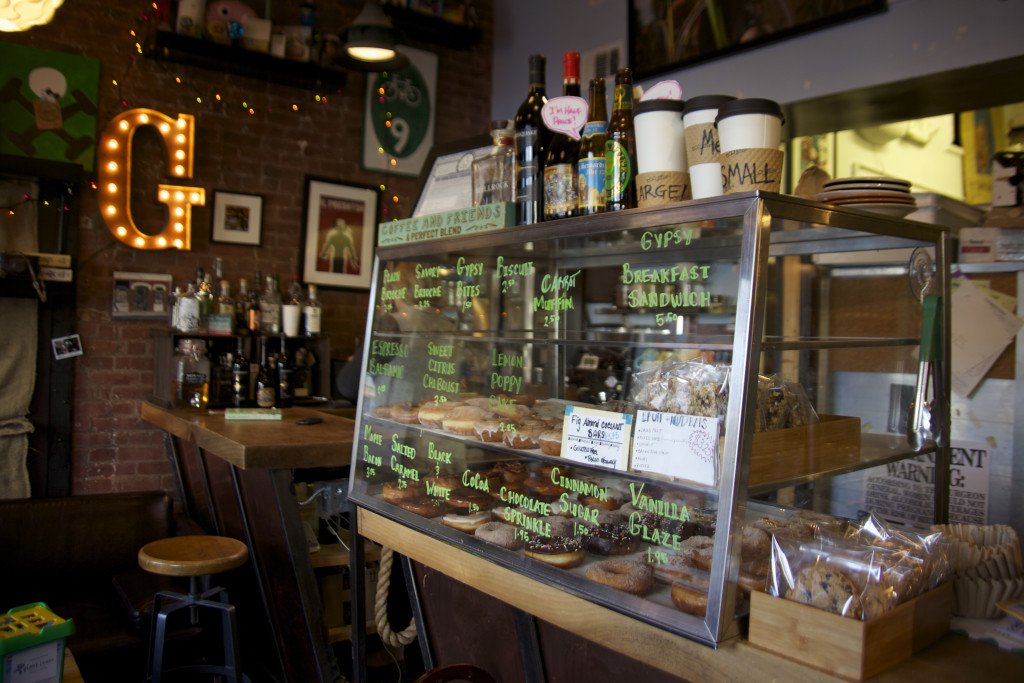 The first thing that sets Gypsy apart from other coffee shops is the freshness of their product. All of their coffee is served within 7 days of roasting, at which point it gets donated to a local soup kitchen. Gypsy’s donuts are prepared fresh daily by trained pastry chefs; all of their donuts, donut toppings, and fillings are made from scratch with fresh ingredients sourced from local farmers markets and local vendors. They also use no preservatives; so eating them the day you buy them is a must. Local favorites include their salted caramel donut made with homemade caramel and the maple bacon with homemade maple glaze and candied bacon strips.

Gabby and I had the opportunity to meet with Eric Brown, the Manager of Gypsy Donut who also happens to be my old roommate from college. Eric is somewhat of a local celebrity; he appeared on MTV’s Silent Library in 2012. He has also appeared in some locally produced independent films, and will be making his big screen debut in September as a barista in the upcoming Robert Deniro film The Intern. 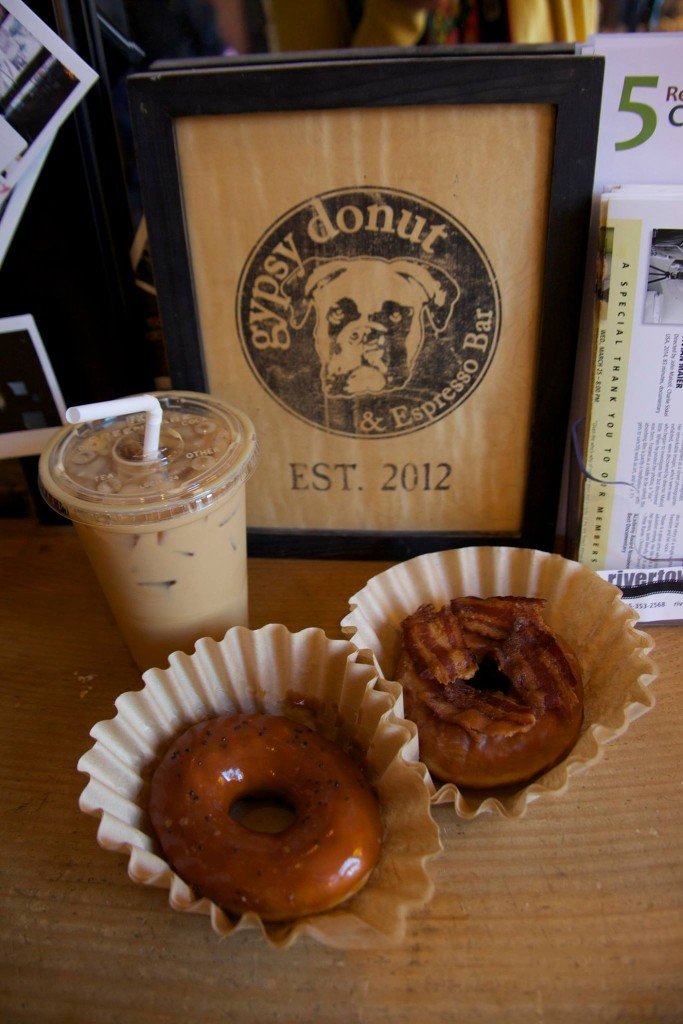 Before Gypsy Donut opened, Eric was working at Coffee Labs Roasters in Tarrytown and learning a lot about the process and art of roasting coffee. A job offer from Gypsy meant the opportunity for Eric to work closely with Stumptown Roasters, one of the biggest roasters in the country (originally out of Portland, OR but now with a roastery in Brooklyn, NY as well).

Eric provides extensive in store training so all the baristas can learn to brew coffee in any of the 8 different methods of preparation. They offer lots of choices from standard drip, to pour over, to more exotic methods like the Japanese syphon or the Kyoto which brews by gravity and makes just 120oz in 20 hours. They also have a full espresso bar and my favorite cold brewed iced coffee anywhere. After in store training, the baristas are also educated and trained by Stumptown Roasters in Brooklyn so that Stumptown can make sure the baristas are serving their product the way it ought to be served.

The addition of a liquor license this year has allowed Gypsy to expand into serving alcoholic beverages as well as coffee and donuts. They have since added a few taps and are serving a rotating selection of local Defiant Brewery beer in addition to their selection of liquors including local whiskeys from Hillrock Estate Distillery, Brooklyn Gin, Owney’s Rum, Bootlegger 21 Vodka. If you want to unleash your inner mixologist, try one of their craft spirits from Art In The Age out of Philadelphia, they’re 80 proof liquors and come in a wide range of flavors including rhubarb and sage.

The increase in nighttime business has given Gypsy the opportunity to begin hosting nighttime events in the community. They recently started a game night where you can challenge your friends to a cutthroat game of Munchkin while chowing down on a donut and sipping a sage martini. They also set up a TV with some retro gaming systems for old school video game nights. If the crowded frat-house vibe of the other Nyack bars isn’t what you’re looking for, you can get your friends together and check out gypsy donut for a different kind of night on the town. 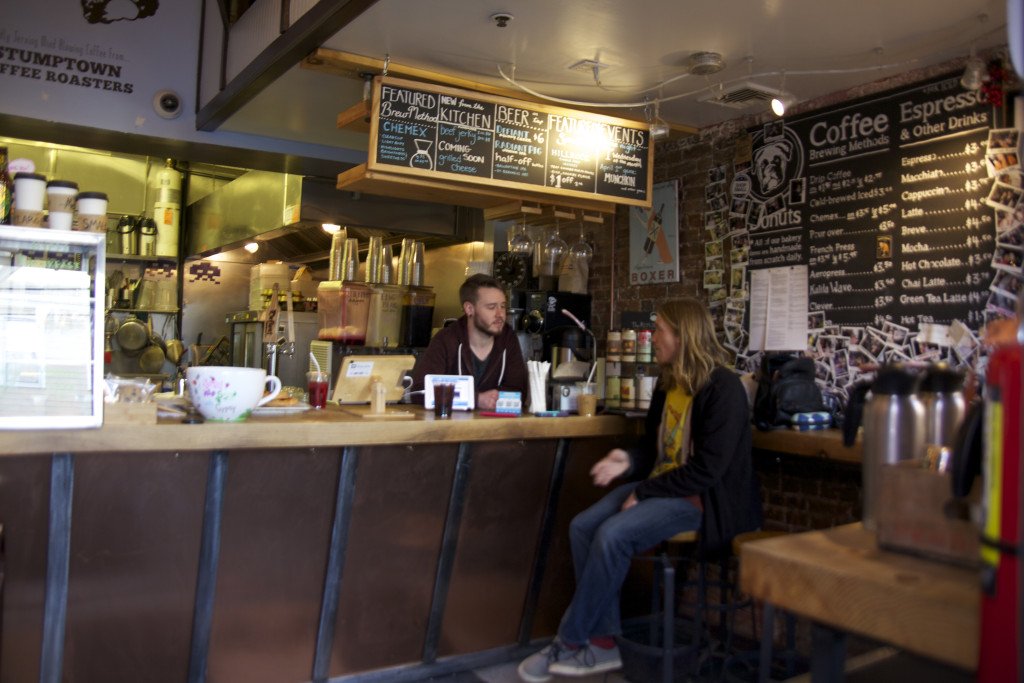 Gypsy donut is exactly the kind of place Gabby and I look for when we’re on the road. It’s a locally owned and operated donut bar that feeds into the community that supports it. Every time we stop into Gypsy, they always have something new and exciting going on. Although it’s nearly impossible to make choices with all of the amazing options, their wonderful friendly staff loves helping us navigate our difficult donut decisions and coffee quandaries. Visiting Nyack, NY and Gypsy Donut is always a treat!