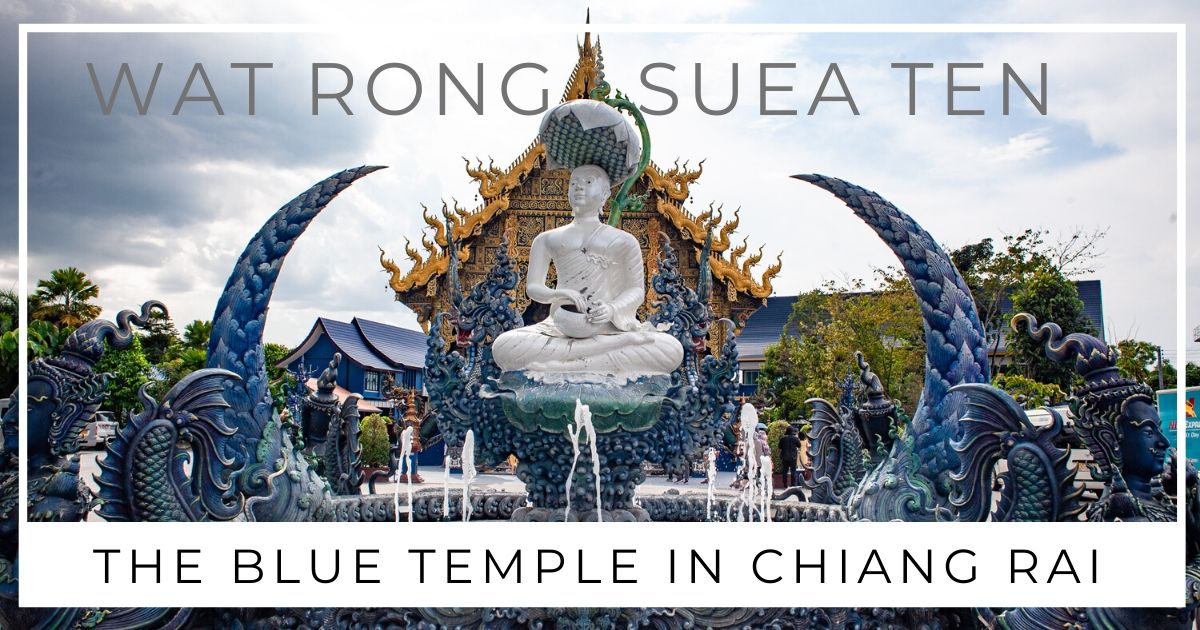 Written for Local Nomads by Lois of https://auburnroe.com

The Chiang Rai Blue Temple is one of those spots that I’d longingly admired on my Instagram explore page when it popped up every now and then. I’d gone as far as print screening some of those eye-catching posts from travel bloggers for future reference, but never investigated where it actually was. Added it to the mental bucket list. Carry on scrolling.

Fast forward to my trip to Thailand this summer, and without the mention of the Blue Temple in the guide book I had been following religiously, I was shocked when I happened to stumble across a fellow backpacker in Chiang Rai who mentioned it was nearby.

Without hesitation, my friends and I flagged down the nearest tuk-tuk and headed straight for ‘Wat Rong Suea Ten’, also known as the Blue Temple.

Boy, were we not disappointed.

Chiang Rai is well known for its famous White Temple which, as expected, was surrounded by tourists when I visited, so compared to this, the Blue Temple was practically empty. Having only recently opened to the public in 2016, it’s definitely one of Thailand’s newer and underrated temples, and certainly not quite yet on every tourist’s radar. However, the blue temple’s beautiful décor is guaranteed to start attracting more and more as time goes on, so add it to your Chiang Rai itinerary ASAP! 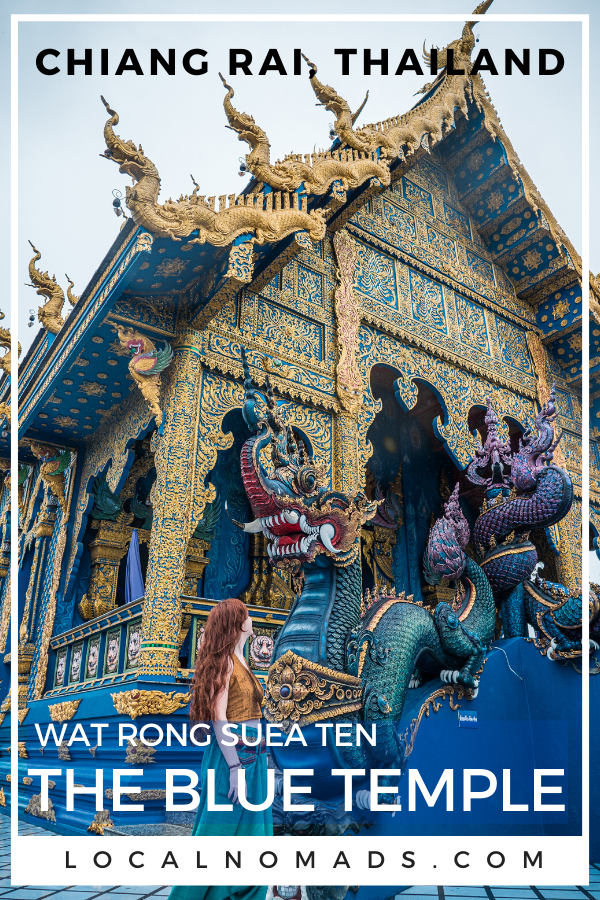 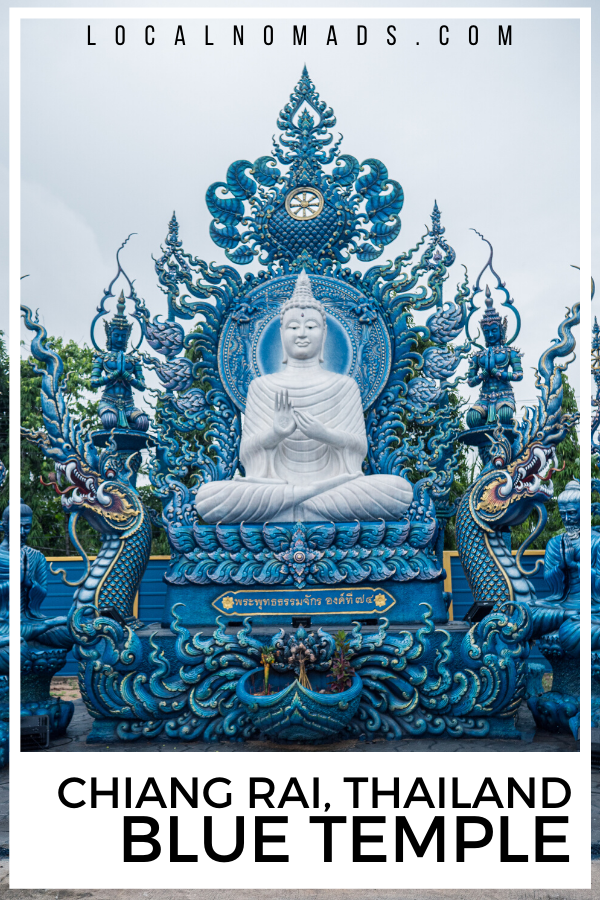 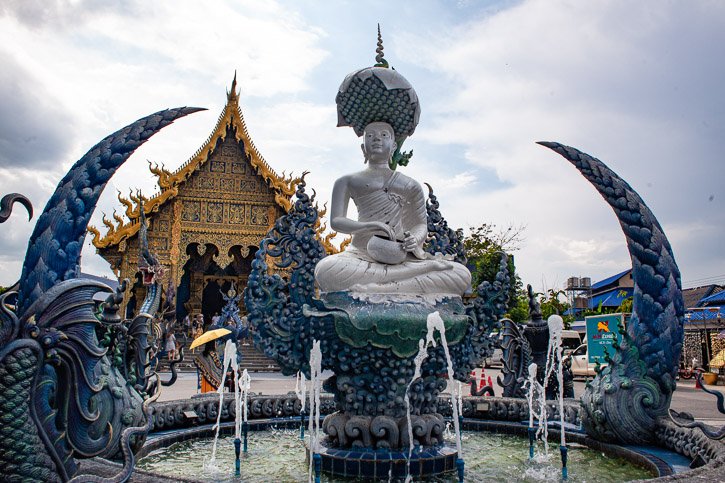 WHAT TO KNOW BEFORE YOU GO TO

THE BLUE TEMPLE IN CHIANG RAI

The Chiang Rai Blue Temple is situated in the Rong Suea Ten village where, according to legend, tigers used to jump over the Kok River. The name of the temple literally translates to ‘House of the Dancing Tigers’.

The site of Wat Rong Suea Ten used to be home to the ruins of a temple that was abandoned in the early 1900s. Construction of the new temple started in 2005, and the main hall eventually reached completion on 22nd January 2016. The original idea for the temple dates back to 1996, when villagers gathered together and discussed the need for a space to worship and earn good karma.

The monastery was designed by Putha Kabkaew, a student of the mastermind behind the design of the White Temple, Chalermchai Kositpipat, and there’s certainly no denying some similarities in the details.

Local Nomads note: We booked a Chiang Rai Famous Temples Small Group Tour from Chiang Mai through Get Your Guide. The tour included pickup and transport from Chiang Mai and cost about $45 USD/person. We saw the White Temple, Blue Temple, and the Black House. Surprisingly, the Black House actually ended up being the highlight of our day! By booking this tour through our affiliate link, we will receive a small commission on sales. Thanks for supporting Local Nomads! 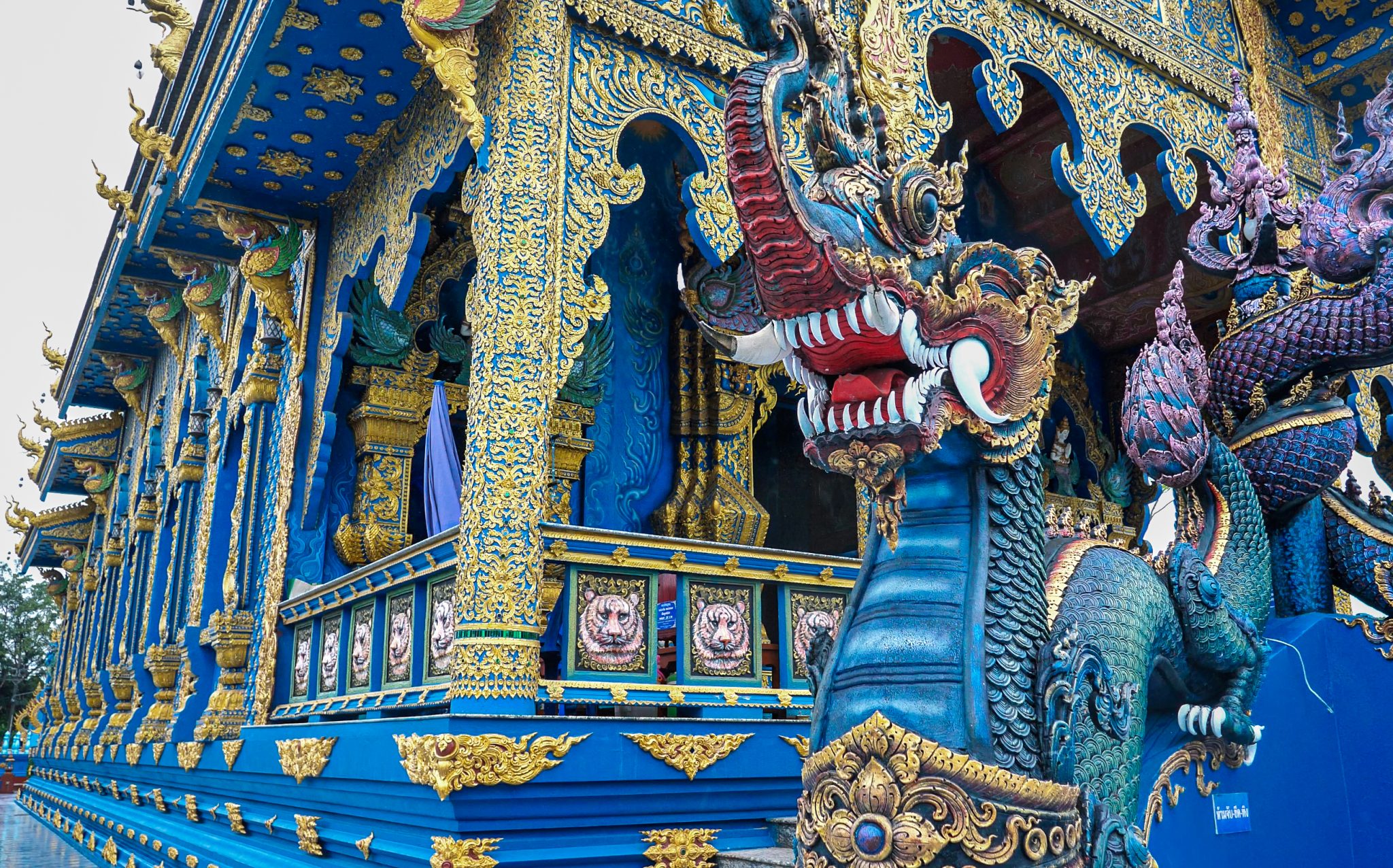 The first thing you’ll be hit with on your first visit (apart from a lot of the colour blue!) is just how detailed everything is.

Each scale of the ‘naga’ (the snake-like creatures who guard the entrance) is intricately designed, and every little element has been carefully crafted. See if you can spot the tiger faces on the sides of the entrance! 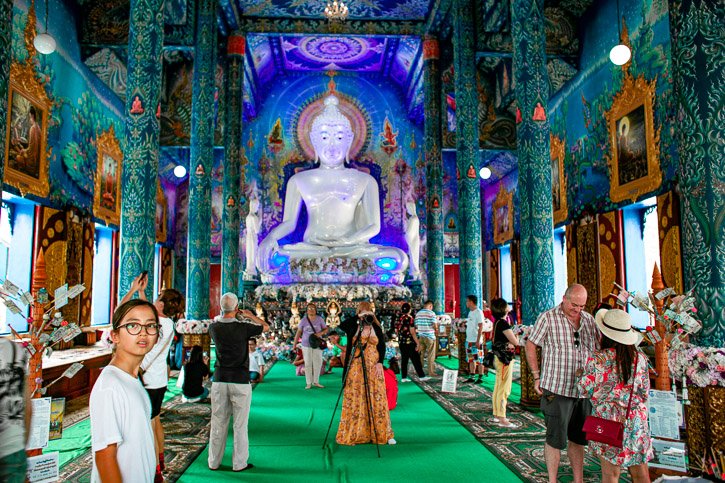 The inside of this temple is full of Buddhist imagery, colourfully depicting the story of Buddha’s life with a giant ceramic shrine of Buddha at the far end. Unlike the White Temple, you are allowed to take photos of the interior, so it’s a great chance to get some truly stunning photographs.

The colour combinations are breath-taking – gold embellishments and psychedelic-like paintings cover the interior from head to toe. Make sure to take in the décor from every angle. (Don’t forget to look up!)

Due to there being only one point of access to enter and exit the temple, it’s easy to just admire the temple from the front. It’s worth noting that you should definitely take the time to walk all the way around the exterior of the building. The back of temple boasts another large white statue of Buddha, this time in a standing position to represent calmness. This would be pretty easy to miss if you were only having a flying visit. 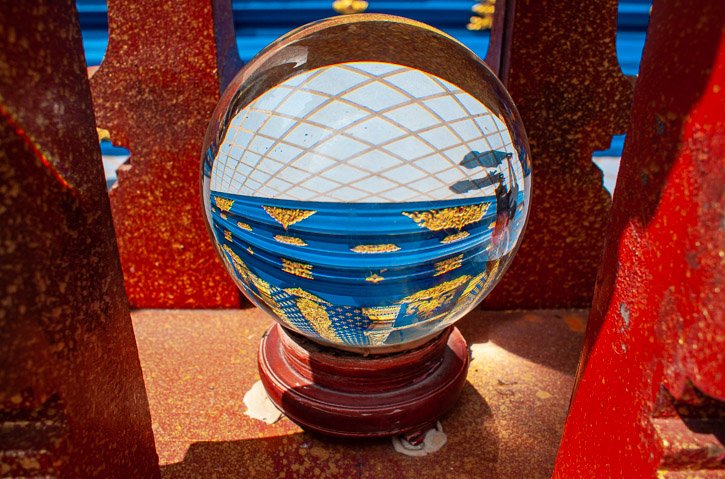 Top tip: It’s also a great part of the grounds to take photos, as most people will be posing at the front of the building.

In addition to the temple itself, the site is home to a few other structures and shrines, as well as a stunning water fountain, all keeping within the blue theme. Just try to avoid getting any parked cars in your photos – the blue structures are scattered around the courtyard in front of the temple, which also doubles up as a car park!

(It could be easy for the traffic cones to take away from the magic.) 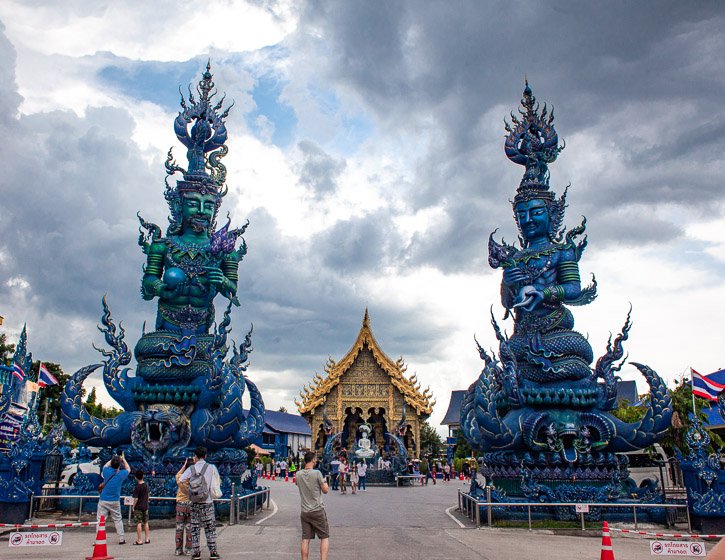 So, why is the Blue Temple so blue?

If you hadn’t already guessed, when it comes to architecture, Chiang Rai certainly has a thing for sticking to colour themes:

So, what do all of these mesmerising shades of sapphire portray?

In Buddhist symbolism, the colour blue is associated with healing. Dark and light have different meanings, but it is said that the lighter, almost turquoise shades embody the coalescence of life and death. Whereas the darker shades of blue depict purity and tranquillity. 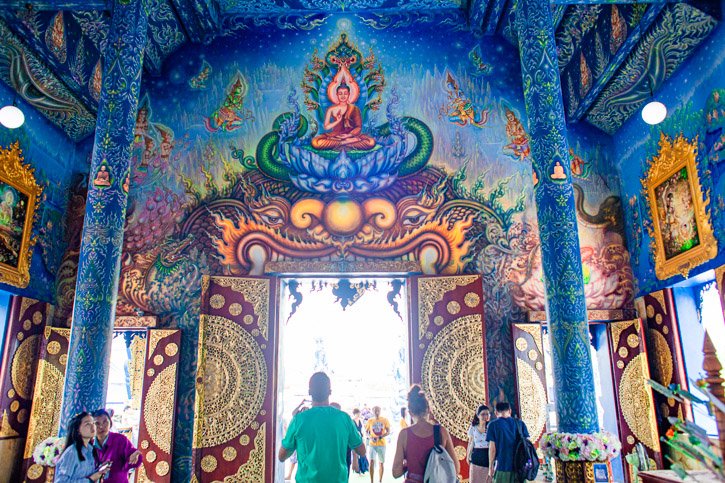 If you look up as you leave the inside of the temple, you’ll see a Buddhist depiction of hell; the colour red drastically contrasting against the blue. And if you look even closer, you’ll notice that you’re exiting through a demon’s mouth. (Fun fact!)

The temple’s windows are adorned with vibrant gold carvings featuring Buddha meditating at the top. Scattered around the building are smaller statues of angels and other figures from Thai folklore. 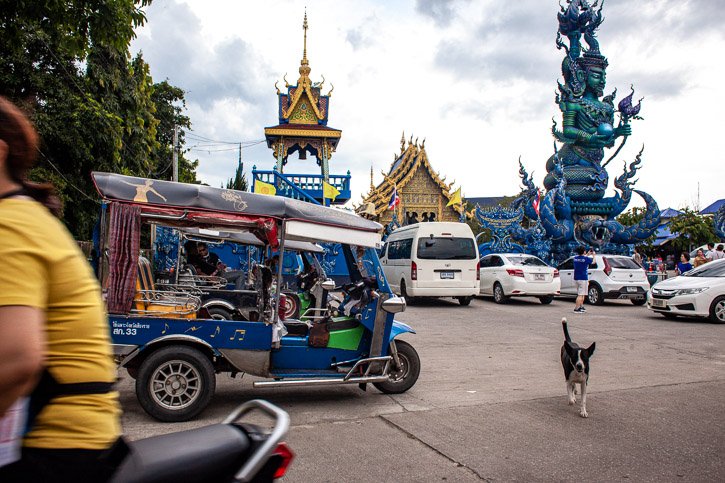 When to Visit the Blue Temple

The temple is open daily from 7am-8pm, so if you’re wanting to avoid photoshopping people out of your photos, I’d advise getting there first thing. As I stated earlier, the number of visitors is only going to grow, and I suspect it won’t be long before visitors are charged for entry and the place becomes overcrowded. 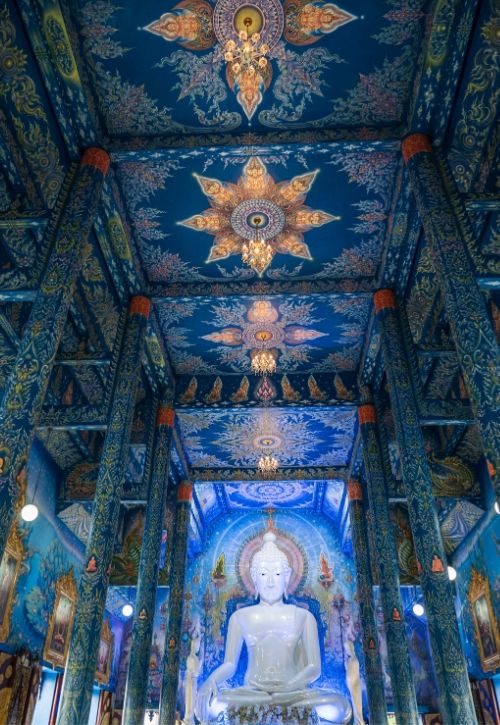 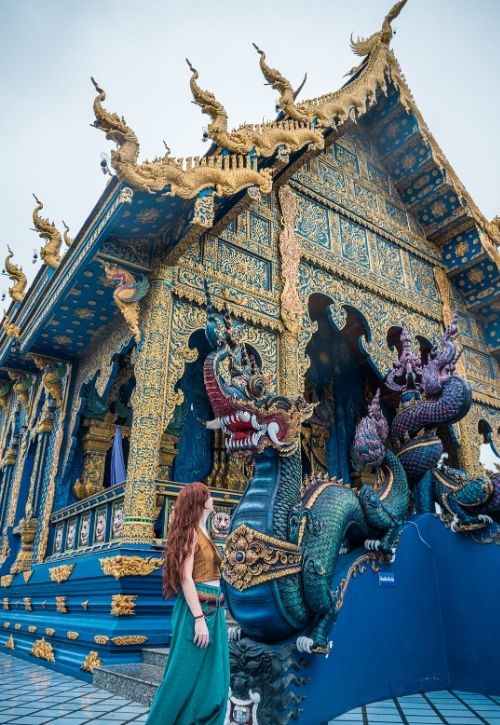 Photographs by Lois of auburnroe.com

How to get to the Chiang Rai Blue Temple

As with most landmarks in Chiang Rai, you’ll have to hire a taxi or tuk-tuk to take you there. (It’s about a 40-minute walk otherwise.) You can negotiate the price with your driver, particularly if you want them to wait for you whilst you walk around (a common practice if you’re wanting a lift to see other sites afterwards). A reasonable price for a tuk-tuk ride from the centre would be around 50 baht.

Top tip: If you head North on Phahonyothin Road for around 20 minutes, you’ll reach Baan Dam (or the ‘Black House’). So, if you’re heading to that more well-known attraction, the Blue Temple is great stop off either on your way there or on your return.

There’s also the option of hiring a motorbike or bicycle, as the temple is only a 5 to 10-minute drive from Chiang Rai’s town centre (approximately 3 kilometres). It goes without saying that this is only advised if you have prior experience! 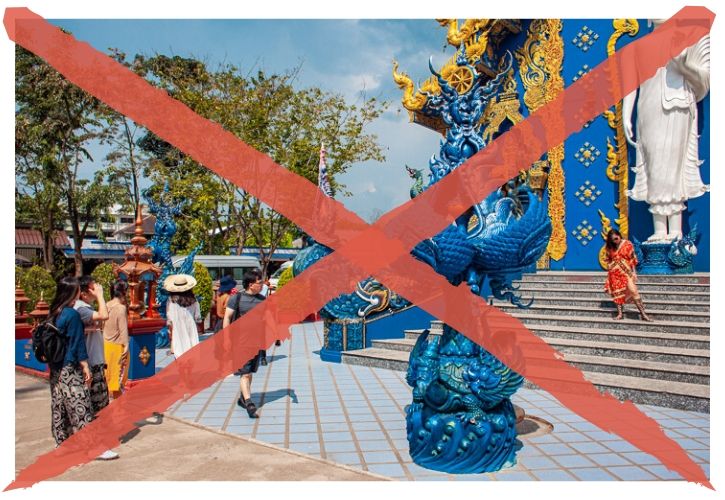 Being Respectful at the Blue Temple

Whenever visiting a religious or spiritual landmark, it’s important to educate yourself on the expected etiquette in order to avoid showing any disrespect. As most temples, you are required to remove any footwear before entering the Blue Temple. Knees and shoulders should be covered whilst inside and any conversation should be spoken at a low level.

Other things to bear in mind include:

-Photography is permitted, but do not pose for a photo with your back to Buddha

-Do not point your feet towards Buddha

-Affectionate behaviour such as hugging and kissing is disrespectful

There is a space directly in front of the Buddha statue inside reserved for monks, so be sure to look out for the signs and not to cross it.

Most temples will have vendors selling sarongs and scarves for you to use in the case of forgetting something to cover up with, and the Blue Temple is no exception to this. There are plenty of stalls to the right of the main building selling clothes as well as refreshments. Thailand can get very hot on a sunny day, so make sure to stay hydrated. 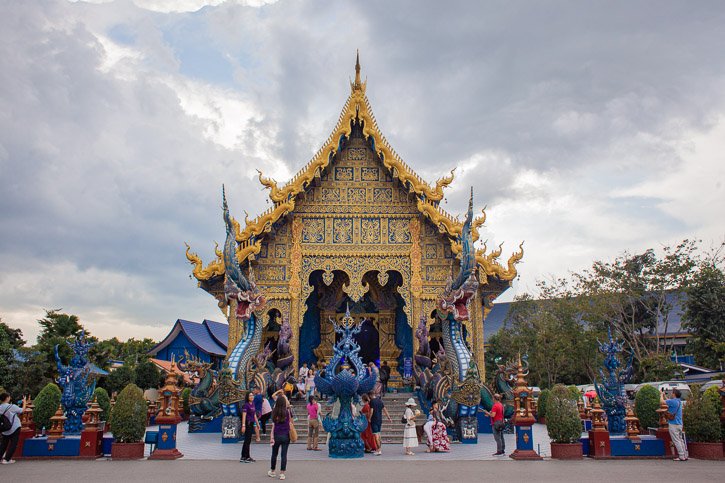 How much does it cost to visit the Blue Temple in Chiang Rai?

Entry to the temple is free, however there is an opportunity to make donations at the entrance to the temple, as well as lighting candles and incense..  Parking is also free.

Are there public toilets available?

Yes! And they’re clean too. 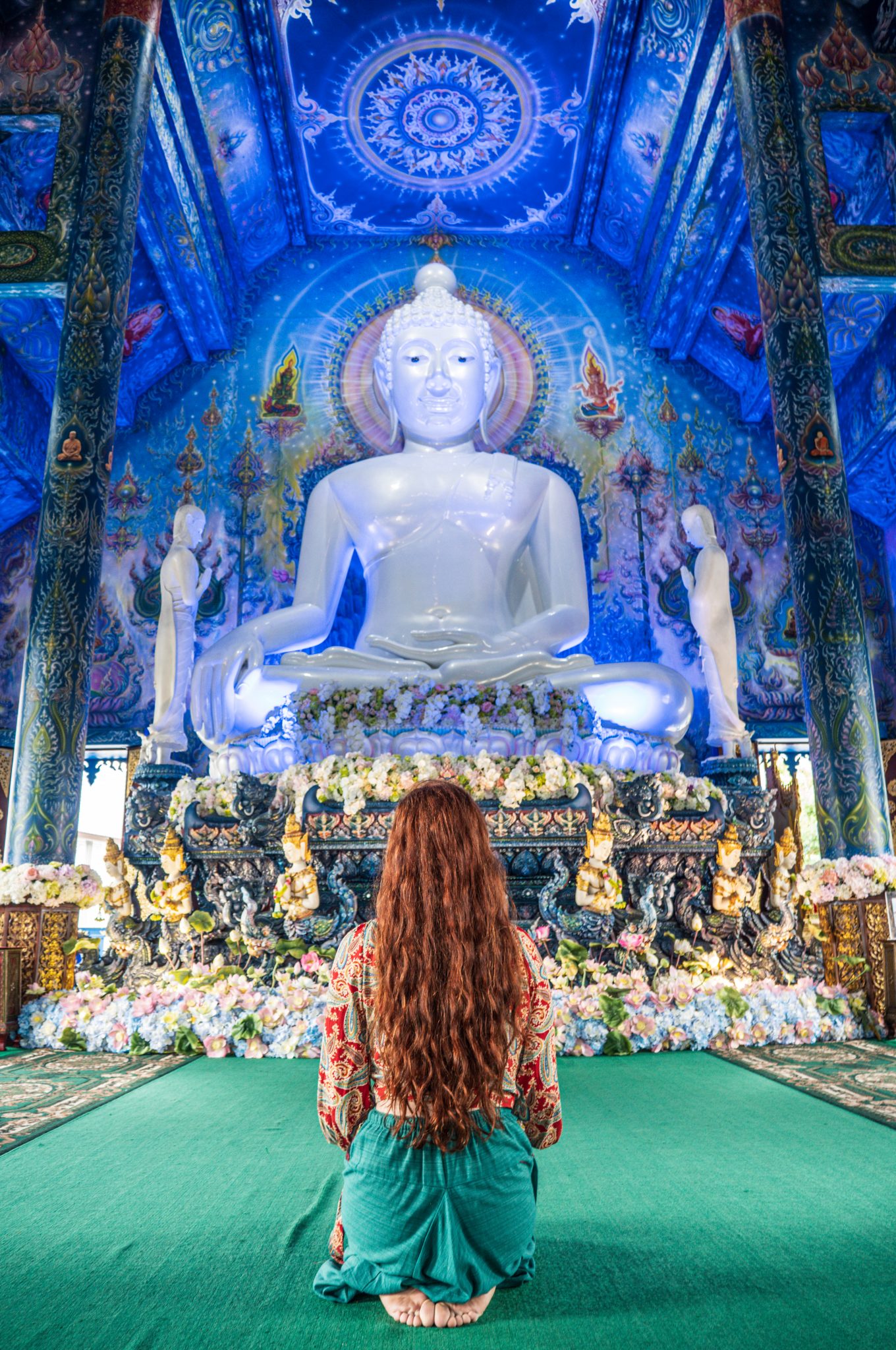 My final thoughts after visiting the Blue Temple in Chiang Rai

It’s safe to say, I practically ditched my guide book after this experience. Throughout my 2-month trip to Southeast Asia, Wat Rong Suea Ten remained my favourite temple that I had the pleasure of visiting. It just goes to show how beneficial it is to chat to fellow travellers, locals and basically anyone who you cross paths with.

Don’t get me wrong, guidebooks are great for getting a rough idea of what attractions there are to see, and you can certainly use them to create the skeleton of your itinerary if that’s what you prefer. I like to have a rough idea of what there is to see so I’m not overwhelmed when I arrive!

However, not every guidebook is able to feature everything you can possibly see in one particular area, especially when it comes to sights that aren’t yet well established amongst tourists. And if you want to get off the beaten path, you can kiss your guidebook goodbye! In addition to getting the insight from the locals, my other piece of advice is to check out blog posts (like this one you’re reading now!) that are up to date and full of helpful information. 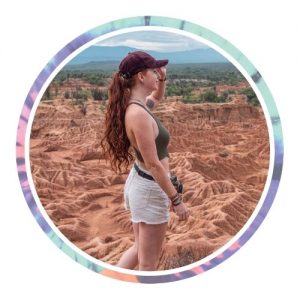 After graduating from University, Lois has set out on a journey to avoid the 9-5 and see as many corners of the world as possible. Alongside her ever-growing passion for photography and mental health awareness, Lois created her blog AuburnRoe.com to share with others what she learns from her experiences around the globe, all whilst inspiring her readers to get out there and explore it for themselves. 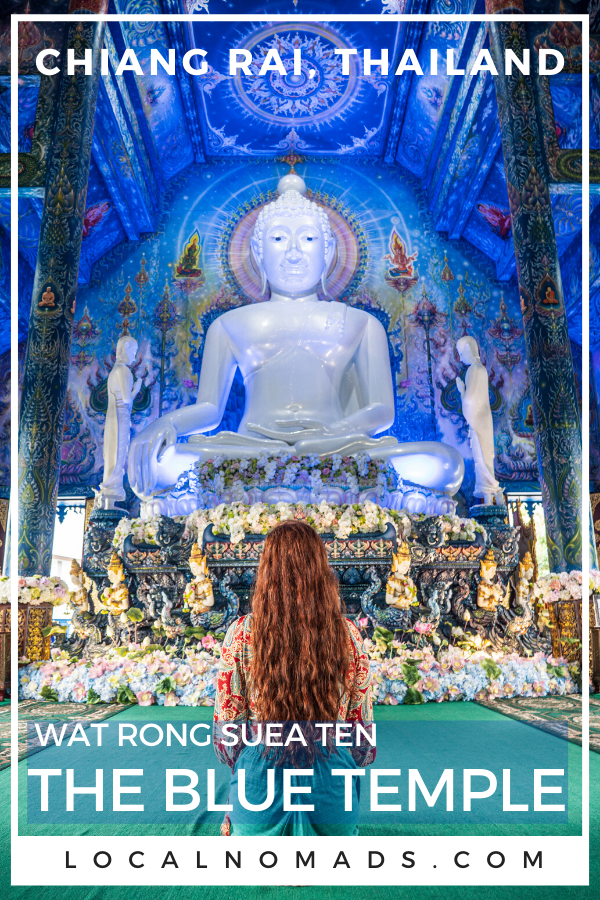 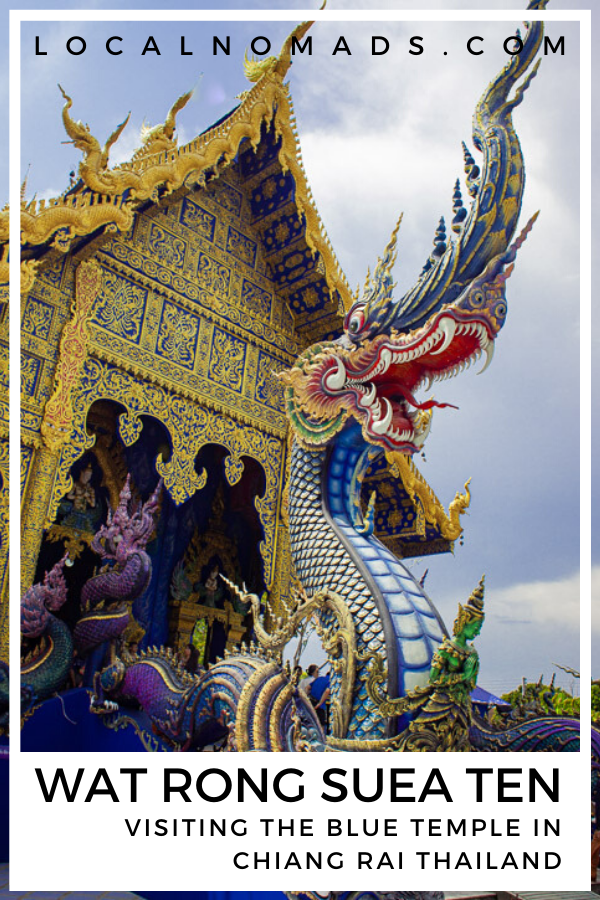 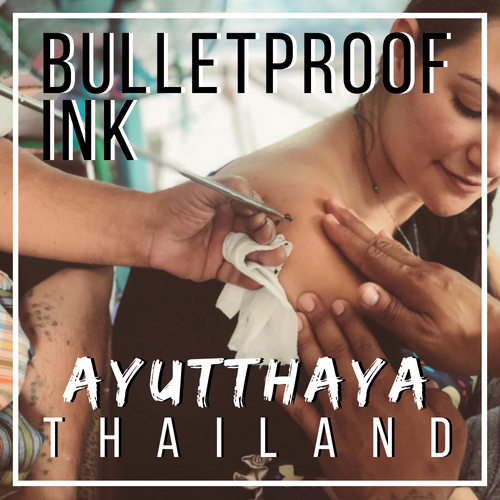 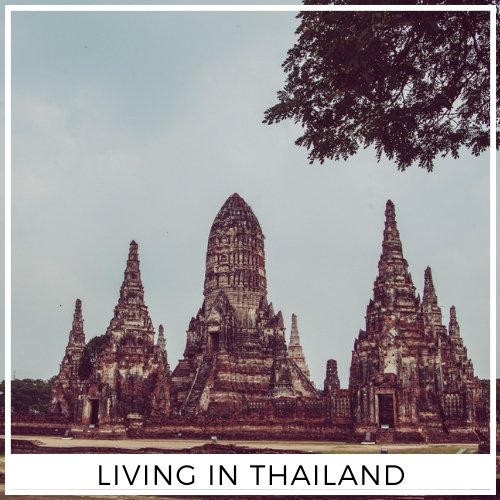 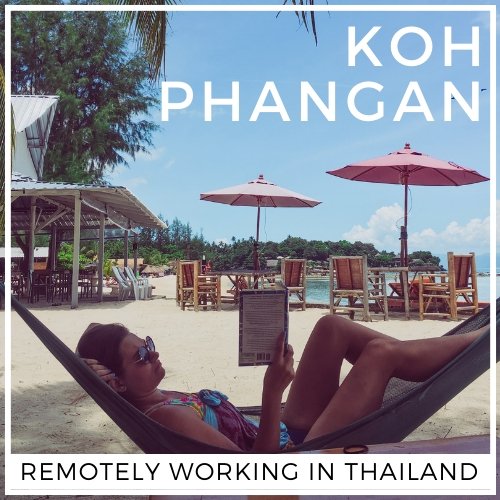